umani Corporis Fabrica (DHCF) is one of the most influential works in the history of Western Medicine and is the masterpiece of anatomy professor, Andreas Vesalius’s, life’s work (“Turning” 1). Translated from Latin, the title of the book means “on the fabric of the human body” – a fitting title as in it, Vesalius discusses the dissection of the human body. The book is prized by a hundred libraries worldwide for its breakthrough findings, elegant printing, and beautiful illustrations (Garrison 1). This site will compare the 1543 version of DHCF to Robert Burton’s Anatomy of Melancholy, which was a influential work in early human psychology.

Vesalius was born on December 31st 1514 in Brussels, Belgium (Garrison 1). In 1529 He attended a Latin based liberal arts university, which may explain why DHCF was written in the already dying language (1). Vesalius later moved to Paris, France, to study medicine. His school focused on theoretical instruction and hardly allowed for any ‘hands on’ learning that Vesalius craved. Through self-guided practise, Vesalius eventually gained a reputation for his skill with the knife and was asked t

The day following his graduation, Vesalius was appointed to a lectureship in surgery and anatomy and after some
years, began working on his own book, DHCF. By August 1542 (age 28), the first edition was complete and Vesalius and travelled to Basle to supervise its printing with renowned printer, Johannes Oporinus (1). He watched carefully and demanding that any error be corrected, no matter how miniscule (Nutton 1). Vesalius continuously worked on improved editions of his masterpiece until his death in 1564 (Garrison 1).

Robert Burton’s book was also influential in its realm and too provided an inside look into the human body. Although it was published over 100 years after DHCF (1676), it intermingles untranslated Latin quotes into English text. Perhaps both authors used Latin to pay tribute to their teachings.

The provenance of the book is something that needs to be examined with slight skepticism. Some editions can be decisively traced to the original owner, such as the large armorial bookplate with twenty-four quarterings, which was engraved for John Cecil, fifth Earl of Exeter and sixth Baron Burghley. “Cor unum, Via una” (One heart, one way) is written on the book plate, which is the family motto of the Cecils.

The fifth Earl’s copy of Vesalius stayed with the family for an extensive period of time, until 1959, when well-kept portions of the volume were sold in London on July 15. The edition at this point had had its better days – water stained and lacking a few pages, it was repaired by an auctioneer before it was sold to “Birkenhead” for £480. This edition attracted the attention of someone with a rare portrait of Vesalius, who then took it apart and restored it to it’s original quality, now with the portrait, “Vesalius” printed above it in 12-point Basel italic font. The Fabrica isn’t alone in its reparation; Burton’s Anatomy had also experienced revisions and cataloging long after Burton’s death in 1640.

Outside of the Cecil family, the provenance of De Humani Corporis Fabrica is much harder to trace. Some potential owners including:

Vesalius was put on exhibition once, at the Metropolitan Museum of Art, in a show titled “The Power of Prints: The Legacy of William M. Ivins and A. Hyatt Mayor,” in 2016.

The text is written in latin and is more than 80,000 words. It is descriptive and based on direct observations of human anatomy. The font is Basel Antiqua distinctive to the 16th-century printing powerhouse Basel (“Specially Designed Typeface”).

The book utilized the newest technologies and progressive artistic conventions, making it not just a front runner at the time in anatomical knowledge and understanding of the human body, but also in print technologies (Park, 1): incorporating content, art, layout, historiated initials, and typography (Hughes).

It relied heavily on these images to support the text and the images were all taken from direct observation of cadavers (Park, 4). Vesalius married the images and the text, using an elaborate system of cross referencing, marginal annotations, and captioning (Vesalius).

There are over 200 woodcuts in the text. Vesalius intended the book to be for artists and the wealthy elite as well as for physicians (Hughes). In his printers note to the 1543 edition he says, “…they are not just simple outlines drawn in the common schoolbook manner; the artistic style … is nowhere neglected (“De Humani”).” 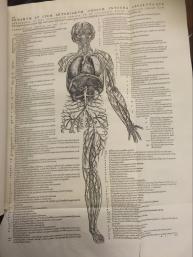 The images are now more recognizable than the text; they have their own aesthetic and artistic merit, with imaginative conceptions. An example of this is the illustrations of skeletal figures in Book I are posed in various positions of mourning and meditation (Vesalius).

The illustrations in the book were made by woodcuts from the studio of Titian, produced through a collaborative effort (Park, 5). However, Vesalius wanted to emphasize his own achievements in the book, even going as far making himself the centrepiece of the illustration in the frontispiece (“Vesalius’s Anatomy”).

The Anatomy of Melancholy also used engravings to create it’s illustrations. The illustrations are not as much of a focal point as in DHCF, but rather are an accompaniment to the text, depicting different forms of “melancholy”.

The advancements in printing, as well as book binding, between the fifteenth and sixteenth centuries allowed for the introduction of smaller books, which were much easier to bind (“16th Century: Birth of the Modern Book”), and are evident in DHCF’s binding. Wood had been phased out as the book covers’ material, having been replaced by layers of paper that had 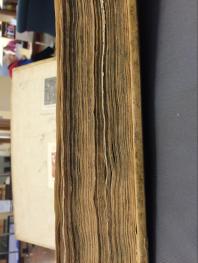 been glued together, which were known as pasteboards (Anderson). Moreover, the use of paper for making the books’ pages had become more popular, as paper had become cheaper and more accessible. This edition of DHCF is bound with the original marbled brown calfskin over
pasteboard from it’s release (Park, 8). Anatomy of Melancholy is similarly bound with marbled board, although the book was rebound with this in the twentieth century. The rebacked spine of DHCF is separated into seven panels, and one of these panels is tinted in a darker shade than that of the rest of the calfskin, depicting illegible gold print, potentially of the book’s title. The papers used to make the book’s pages are all somewhat uneven in size. There are also some pages that are thicker than others. This is likely due to the paper being handmade. This aesthetic of uneven paper is also evident in Anatomy of Melancholy, whose pages have been cut unevenly for the book’s rebinding. DHCF’s pages show signs of wear, as most of them are discoloured, and some are torn and wrinkled. Overall, while the book does show obvious signs of it’s age and antiquity, it has been noticeably well-kept, as it remains bound together, with both the front and back covers still intact.